The Crosses Badminton Club, formerly know as the Sandbach Leisure Centre Badminton Club – (SLCBC), was formed in April 1976, when the Leisure Centre was added on to the Sandbach Girls’ School.
A notice was put up at the Leisure Centre by the late Roy Isherwood and other like minded Badminton players  to test the water about starting a Club.  A very well attended meeting was held and it was agreed to form a Club.  The Management at the Leisure Centre told us it would have to have their name in the title of the Club, but after a few years we decided to change the name.  A Competition was held in the Club and the name – The Crosses Badminton Club – was chosen , suggested by Member Philip Rose, who has sadly since died.
A Committee was formed to start the Season off in September and Roy took on the role of Chairman, which he held for many years. Terry Sumner was appointed Secretary and has held the post ever since.  The only other two founder members who still play at the Club – David Sumner and Alan Horne have held various posts throughout the 40 years we have been playing. Today David is Chairman and Alan Vice Chairman – posts they have each held for many years.
The Club joined the Crewe and District Badminton League in 1978 and has gone from strenth to strength since then, winning many of the League’s Divisional trophies as well as individual Tournament trophies.  Several of our Members who started as Juniors, went on to play for the County – Mike Pumford, Peter Isherwood, Steven Holmes, Mark Watts, David Poniznik amongst them. We were also converted to playing on Feather Shuttles as  the Club had started playing on Plastics!!!
Our Membership has always been healthy but we are still on the look out for new Members and if you are interested in playing at a Club, which also has a very good social scene, please give one of our Committee a ring,   Contact details click here
We have Mens, Mixed, Ladies and Veterans’ Teams playing in the League and our standard varies from 1st Division Players down to regular Club Members. 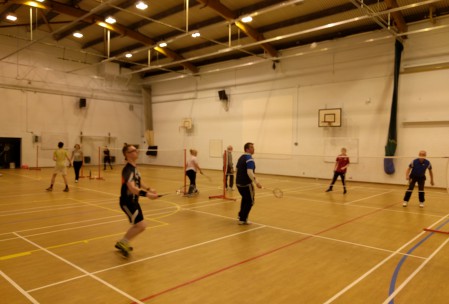